Mind and Body, Qabbalah and the Sorites Paradox

The name of the Sorites Paradox comes from the Greek word for heap, “soros”, a key word in the typical formulation.

If someone had one million grains of sand, they would have a heap of sand.

If we took away just one grain of sand, it would still be a heap. And similarly, the second grain. But what if we kept on taking away one grain at a time? No single grain of sand stands between heap and non-heap.

And yet, we would never call a single grain a “heap of sand”.

Similarly, the colors in a spectrum. If you look at the light in a spectrum, it is easy to find (for example) the red, orange and yellow regions. But it is not so easy to find the exact point at which one side is red, and the other orange. As we magnify the range where this transition happens, we even can get two colors that scientists tell us differ, but our eyes do not distinguish. And yet, one color turns into the other through a long sequence of such unnoticable changes.

The paradox is about the fact that people create labels for categories even when the scale is continuous. (Or in the case of sand, nearly so. We aren’t taking away halves of grains, nor quarters…) We want the label to apply to some area on the spectrum, leaving us with a term whose applicability can fade away so slowly we can not notice exactly when we would stop using it.

A problem philosophers have is mind – body duality. Or the soul – body duality. (Since in Mussar and Qabbalah, the mind is an aspect of the soul, or perhaps  more precisely, it is something the soul does.) In their discourse, Des Cartes is the noted champion of saying the mind is a different kind of thing, no less real but distinct from, the brain, so they call it Cartesian Dualism. But the question of such dualism is: How can something intangible like a mind interact with physical objects, like a brain, and make physical events happen like bodily motion?

In more recent times, we can trigger sensations and memories by applying tiny electrical charges using electrodes? Is thought the domain of body or mind? And if the answer is “both”, how do they interact?

One approach is monism, to deny this whole Cartesian Duality. The mind is something the brain does; nothing more, nothing less.

And it is usually assumed that Jewish Thought must embrace some form of dualism.

I would like to propose a third alternative, which I will call Qabbalistic Gradualism.

According to Qabbalah, HaQaddosh Barukh Hu, the Ein Sof (the Infinite) emanates existence, described using the metaphor of Or Ein Sof (the “Light” of the Infinite). This “Light” flows “downward” through planes of existence that are “closer” to the Ein Sof Himself, getting more “course” and “tangible” until it finally reaches this world, the one of material existence, Olam haAsiyah (the World of Action). 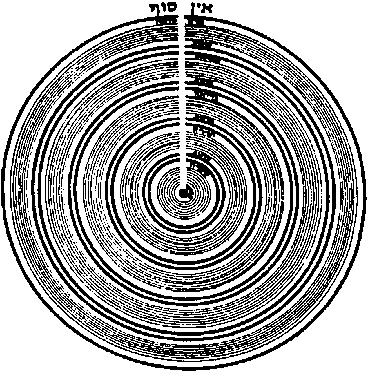 While this talk of worlds makes it sound like the progression “downward” is incremental, in units, we also learn that the four olamim can be subdivided into more fine “layers” and ever so more progressive. (see image) Similarly, in the past I mentioned the Leshem’s observation that Qabbalah’s Or Ein Sof has a lot of overlap with the Rambam’s chain of intellects (from Hashem, to …. to the highest angels, down the various kinds of angels to the spheres, and eventually to us and the physical world. Enough that the Leshem argues that these are two models of the same basic metaphysics. A fact that underlies his entire approach to elucidating Qabbalah. However, this thought only works from within Qabbalah’s notion of Light, as it relies on the gradual descent from HQBH to physical existence.

The entry of the Or Memalei Kol Almin into the potential “space” that thereby becomes existence is called in this metaphor the Qav, the Line. (Which is depicted in the picture on the right as a white line.) A decidedly gradualistic image.

Furthermore, Rav Chaim Volozhiner writes (Nefesh haChaim 1:6) that what makes humans uniquely in the Image of the Divine, betzelem Elokim, is that we are comprised of all the forces, from all these planes of existence. Just as “Elokim” is a name that denotes G-d as the Master and Cause of all those forces. While an angel is on some lofty plane, and an animal is a physical being whose soul is intimately connected only to physical matters, a human soul runs from “10 tefachim below the Kisei haKavod (“Throne” of Glory) down to the physical.

Because Hashem’s “Light” is a continuum, a “Line”, the soul of people, in His “Image”, is also a line. A continuum.

As I opened, continua are subject to the Sorites Paradox. And so, we can talk about brain vs mind, or various aspects or functions of the soul — nefesh (which relates most to the physical), ruach (the will), neshamah, chayah, yechidah, in ever loftier shades. But these, like color labels, are names for regions on a continuum.

It could be that the whole question of how brain relates to mind, or body to soul, is an illusion caused by forgetting the Sorites Paradox. We are asking about the relationship of two concepts believing they are describing two different things. when in fact they are regions of a single whole. Neither dualism nor monism really capture this picture. There is no mind-brain interface. Rather, as we look at the ever more tangible progression of the Or Ein Sof which is us, we eventually reach the ruach‘s physical drives and interaction with hormones and brain chemistry until we are dealing with the physical itself.